Laing O’Rourke is set to start work on a new base for the parent company of fashion brands Calvin Klein and Tommy Hilfiger.

Development manager Stanhope, along with funders Mitsui Fudosan and Aim Co, confirmed PVH Corp is relocating its UK headquarters from Knightsbridge to the Television Centre project. 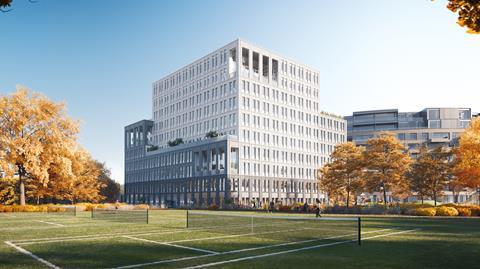 The 1 Wood Crescent scheme is designed by Morris + Company

The scheme called 1 Wood Crescent, a nine-storey building with 111,765ft2 of office space, will be located on the west side of the Television Centre campus. It will include multiple terraces as well as a ground floor reception and cafe.

PVH Corp will move to the top five floors, totalling 50,000ft2 of space.

Stanhope has confirmed that work on the Morris + Company-designed building will start immediately and is due to be finished in the first quarter of 2023.

PVH Corp will be the latest in a growing list of existing fashion and creative occupiers at Television Centre and White City Place, including the BBC and ITV Studios, BBC Worldwide, Publicis Media, Ralph & Russo, Yoox-Net-A-Porter, Soho House and the White Company.