Investment firm’s factory in Selby, near Leeds, is building capacity to produce thousands of homes annually across eight production lines 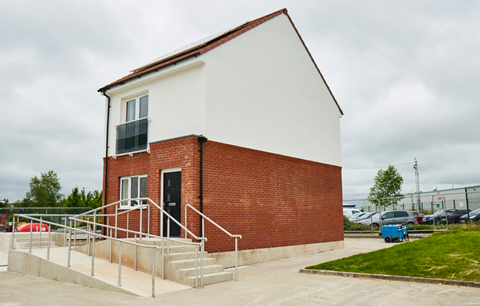 L&G said it expected to deliver its first homes in the first half of next year. Its factory in Selby, near Leeds, is building the capacity to produce thousands of homes per year across eight production lines, employing several hundred local people.

The firm has previously spoken about producing 3,500 ‘flat-pack’ homes a year from the plant.

Rosie Toogood, chief executive of L&G Modular, said: “The unveiling our first prototype today marks an exciting and important step in our programme to bring modular homes constructed from CLT to market.

“This prototype demonstrates the high quality of our modular solutions debunking preconceptions of modular housing. At full production, homes like this will be delivered repeatedly in a matter of weeks without the snagging issues faced by traditional methods.

Toogood said modular construction was “set to revolutionise the house building sector bringing new materials along with methods and processes used in industries, such as car-making to raise productivity and help to address the UK’s chronic shortfall of new homes”.

Toogood was poached from Rolls-Royce last month to head up L&G’s modular housing arm, while in May the firm created two new roles to help in its goal of ramping up its modular housebuilding operation. It appointed Damon Brown, who joined from Essential Living, as a construction manager, and David Jones, formerly of Berkeley Homes, as modular integration director.