Work on L&Q and Countryside’s 3,000-homes project set to start in weeks 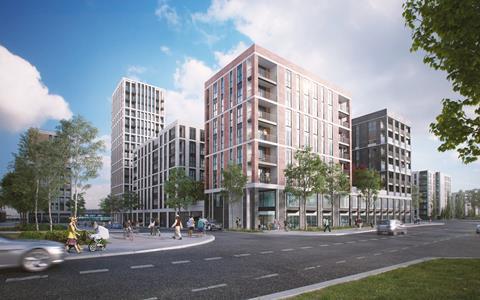 L&Q and Countryside have received formal planning permission for Beam Park, the 3,000-home scheme set to be built on the site of the old Ford manufacturing plant in east London.

At nearly 72 acres, the scheme was the second-largest housing project to be given planning approval last year. The formal recognition of the scheme was given after a section 106 agreement had been signed.

Drwan up by architect Patel Taylor, more than half the development – 1,513 units – is earmarked to be affordable homes.

Construction is due to start within weeks and phase one of the scheme is due to be completed in 2022, although some homes will be ready for residents in 2020.

The project had been called in last year by London’s deputy mayor for planning Jules Pipe after Havering council had rejected the plans, although neighbouring Barking & Dagenham council had given its approval.

Pipe said that “having weighed up the evidence available and given the overall importance of the application” he had decided to grant his approval.

When completed in 2030 the masterplan will include a new railway station, a medical centre, two schools and other community services.