It’s what’s on the outside that counts, as manufacturers lay out an array of solutions for the discerning specifier, from facade sealants to stainless steel shingles 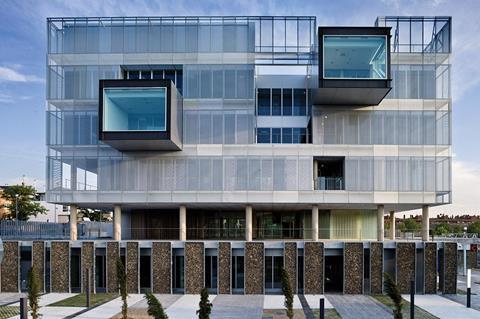 Technal’s GEODE-MX curtain walling system has been used to create a transparent design for a new police headquarters in Madrid. The Fuencarral-El Pardo police building has a double skin envelope which comprises an inner glass facade constructed from Technal’s aluminium GEODE-MX curtain walling. Anodised aluminium panels form the outer skin. These mesh screens have random perforations to help control the depth of field and light penetration, providing a degree of privacy and solar shading during the day, while allowing uninterrupted views out. The space between the curtain walling and the mesh screens provides a ventilated service area running around the whole perimeter of the building for cleaning, maintenance and as an additional measure to conserve energy.

Global building product manufacturer Sika has launched two new joint sealing solutions to add to its range of commercial building facade sealants. The new SikaHyflex joint sealants have been specially developed by the company’s team of technicians to accommodate movement between a variety of substrates as well as ensuring a permanent bond. The SikaHyflex 250 Facade is suited to masonry application including precast concrete panels while the SikaHyflex 260 Facade can be used where high UV resistance is paramount such as the sealing of metal facade components or the perimeter sealing around windows. The company said both products ensure airtight building envelopes permanently at minimal initial cost and thus contribute to the reduction of heating and cooling energy of buildings.

Benchmark Karrier Engineered System with ACM and Aluminium Facades were specified to create a sleek, modern exterior for Kelway’s new operations centre on Artisan Development’s Opus Business Park in Peterborough. Benchmark Karrier is a high performance insulated panel system specifically designed to support a wide range of facades. The systems provides the high levels of thermal performance and airtightness required for the BREEAM “excellent” rating, with air leakage rates of less than 6m3/hr/m2. David Railton from Artisan stated that the Benchmark products were chosen because they “ensured a smooth installation process and offered a great deal of flexibility in terms of colour and finish”. 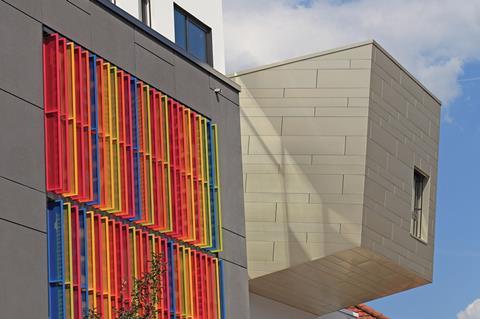 Facades and shopfront specialist, DML Group, has been chosen by main contractor John Sisk & Son for a £2.5m project at London Designer Outlet, currently under construction as part of the major development at Wembley. The Leeds-based firm will design, manufacture, supply, install and test common area curtain walling, shop front cladding and metal pilasters. The company offers a total capability façade solution from design and build to bespoke entrances.

Astley, a UK creative signage manufacturer, chose Vivix exterior facade panels by Formica Group for the building frontage of the Morrisons Kiddicare stores across the UK. With a decorative surface on both sides, Vivix panels offer opportunities to play with colour and shape. Developed in consultation with leading architects, Vivix architectural panels are available in plain colours with sophisticated neutrals and striking accents, nature-inspired abstract patterns and rich woodgrains. The panels can easily be cut into a variety of shapes and sizes to express a whole variety of design concepts.

Aperam Ugitop stainless steel shingles have been specified by RMJM Architects to clad four towers at the Medical Research Council’s Laboratory of Molecular Biology at Addenbrookes hospital, Cambridge. A 0.7mm thickness was established for Ugitop for the project and the company says the shingles were also chosen for their durable matt surface finish, high corrosion resistance, low coefficient of expansion and flatness. 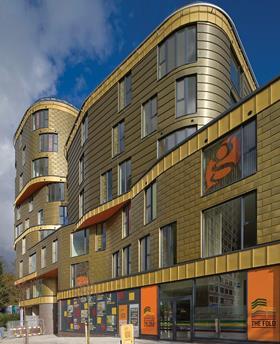 Specialist external envelope contractor Prater has recently provided a curved brass facade at The Fold, in Sidcup for main contractor United House. Prater was selected to provide a complete external envelope package along with an in-house hard metals (copper, brass and zinc) design capability. The building’s facade is manufactured from 63/37 alloy separated by a TECU gold feature band on the exterior.

Lindapter has launched its High Clamping Force (HCF) Hollo Bolt, an enhanced version of its original expansion bolt for SHS, optimised for structural connections. The Hollo-Bolt HCF is available as standard in sizes M16 and M20 and features Lindapter’s patented HCF mechanism which, the company claims, produces a typical clamping force three times higher than the same sized product without the mechanism. The CE marked fastener is recognised by the BCSA/SCI as a primary structural connection and is ideal for other safety critical applications such as securing steel canopies, roofs, glazing and cladding.