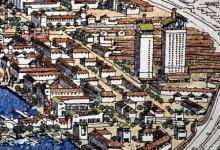 The London Development Agency (LDA) has terminated an agreement to develop the 4,900-home Silvertown Quays scheme in London Docklands.

The £1.5bn scheme, which included an aquarium designed by Sir Terry Farrell, was being developed by Silvertown Quays Ltd, and backed by the Bank of Scotland.

The LDA signed up its development partner in 2002, with the scheme finally getting planning permission in 2007. However, the scheme was put on hold in 2008 as the credit crunch hit.

The LDA said in a statement: “The London Development Agency deems its agreements with Silvertown Quays Ltd to have terminated, after the termination notices expired on 13 February 2010.

“The LDA had, with reluctance, served termination notices on Silvertown Quays Ltd last year. The LDA then had discussions with Silvertown Quays Ltd's main backer, the Bank of Scotland. The Bank of Scotland proposed a new development partner and requested some revisions to the planned approach to the regeneration of the site, including a revised timetable for delivery and other changes to the existing commercial arrangements.

“Having considered the information provided, the LDA concluded that it could not accept the proposals.”

However, sources close to the decision said that legal challenges over the decision to terminate the development agreement were possible. According to the Financial Times, SQL has three months to respond to the decision.