Project will be built on city’s Lisbon Street

Leeds city council has invited developers to bid for a mixed-use development in the city’s centre.

The local authority says a 1.12ha site on th city’s Lisbon Street has the potential for around 500,000 sq ft of mixed-use commercial and retail space and could include residential units or a hotel.

Martin Farrington, director of city development at the council said: “This Lisbon Street site occupies a prime position among many of the city’s top financial, legal and professional services employers within our core business district, which makes it a very desirable space and development opportunity.”

The scheme, which will be built on land at the former international pool site, will have a high-rise block at its centrepiece although the council has not specified how tall the building will be.

The city’s tallest building is the Aedas-designed 32-storey Bridgewater Place scheme which sits close to the city’s railway station and was completed back in 2005 by Bovis Lend Lease.

A plan to build a 55-storey residential scheme in the city called the Lumiere on the site of the Rotyal Mail sorting office on Wellington Street was pulled in 2010 becasue of the financial crash. Designed by Simpson Haugh, the scheme would have featured a second, 32-storey tower and was due to have built by Carillion.

The West Yorkshire city is already experiencing record levels of construction and near the Lisbon Street site, the council is developing a commercial scheme at Wellington Place, which is set to have 155,000 sq ft with retail space and rooftop terraces when the next phase completes in 2020.

Other schemes in the city include a redevelopment of Leeds station and the regeneration of the 253 acre South Bank district. 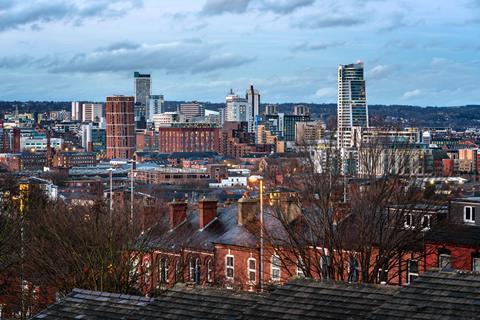