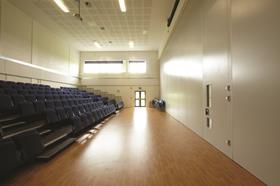 Two of Leeds’ leading universities are planning to spend £375m on capital projects over the next four years, citing increased competition in the higher education market for increasing their development pipelines.

The University of Leeds is planning to spend £300m on capital projects over the next four years, including a planned £40m department building for physics, computing and imaging, the university’s head of estates Steve Gilley told a Built Environment Networking event in Leeds.

In the near term the university has £50m worth of projects in design or procurement, including a planned £25-35m refurbishment of its medical school and construction of a £10.5m multi-storey car park.

Gilley said: “We curtailed our capital investment programme in 2012 [when the £9,000 fees regime came into force] as we predicted a big reduction in student numbers, but actually that hasn’t happened.

“Ambition has now returned and all of our competitors are investing. The taps have started to flow open again.”

Meanwhile, Leeds Metropolitan University is planning to spend £75m on capital projects over the next three years, the university’s director of finance and resources Stephen Willis said.

Will said the capital works will focus on a “rolling programme of improvements” to its Leeds city centre campus, including remodelling the campus’ four main buildings to improve circulation and developing new facades, entrances and retail uses.