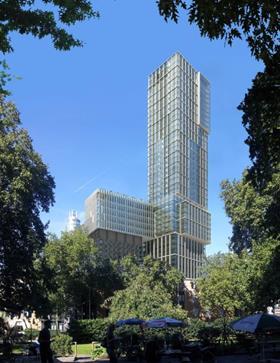 The contract win is the latest sign of life in the Nine Elms area post-EU referendum, after Balfour Beatty announced it won a 33-storey student residential tower in the neighbourhood yesterday afternoon, which itself came hot on the heels of it confirming its pre-construction role on the £1bn One Nine Elms twin towers.

Lendlease has been appointed preferred partner on its tower, which will contain 450 flats and be call AYKON London One. It was designed by US architect KPF in collaboration with international fashion house Versace Home.

Hussain Sajwani, chairman of Damac Group, said: “AYKON London One is a landmark project and our first major international development outside of the Middle East.

“We have great confidence in the London marketplace and this project is already proving to be highly desirable to customers and investors from within the UK as well as other parts of the world.”

Neil Martin, managing director of Construction for Lendlease Europe, also said: “Our strategy of taking a selective approach to bidding is paying off, and is allowing us to focus on prestigious projects such as this one. We’re looking forward to building a strong relationship with the Damac team.”