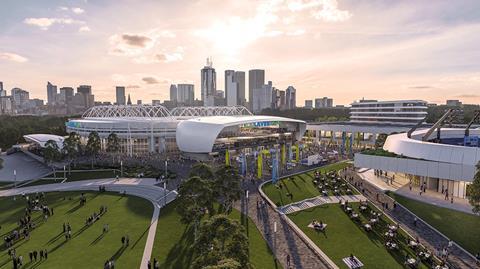 How the revamped Melbourne Park will look

Lendlease has been chosen to carry out the £148m redevelopment of Melbourne Park – the home of the Australian Open tennis championships.

The A$272m (£148m) project is phase three of a A$972m (£529m) transformation of the sporting precinct, which guarantees the Australian Open will remain in Melbourne until at least 2036.

Stage three will also include a new central logistics hub.

Construction of stage three is expected to create 600 full time jobs and be finished by the 2023 Australian Open.

ANALYSIS: How to get into construction in Australia

READ MORE: Lendlease shares jump on back of takeover rumours

In November 2017, the Victorian Government appointed Melbourne-based NH Architecture and Norwegian practice Snohetta to lead the design team on the phase, alongside Aecom as structural engineer and local firm Aurecon as services engineer.

Lendlease is already the main contractor on the A$338m (£184m) Rod Laver Arena refurbishment as part of stage two of the Melbourne Park redevelopment.

Work on Rod Laver Arena, which hosts all the Australian Open finals as well as big-name music acts, with AC/DC, Elton John and Kiss all having played there, is due to be completed by next year’s tournament.

The contractor was also in charge of the A$363m (£198m) Margaret Court Arena makeover, which was completed as part of the first phase of the project in January 2015.

The redevelopment of Margaret Court Arena was designed by Populous and Australian architect Cox – who also designed AAMI Park which is across the road from Melbourne Park and another significant venue in the wider Melbourne Sports and Entertainment Precinct.

Lendlease has a history of working on sports and entertainment stadiums across Australia, including the Adelaide Oval redevelopment and the recently completed Bankwest Stadium in Sydney, which will host a football match between the Western Sydney Wanderers and Leeds United in July.