Scheme at 150 Bishopsgate will be 43 storeys high 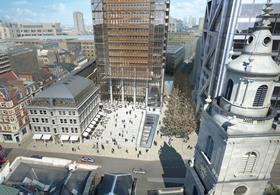 Lendlease is tipped to land the contract to build a long-awaited hotel scheme in the heart of London’s Square Mile, Building has learned.

The 43-storey hotel and apartment skyscraper at 150 Bishopsgate is being developed by Singaporean investor UOL Group who purchased the site for £97m from Gerald Ronson’s Heron International in 2014. According to data provider Barbour ABI the value of the scheme is £500m.

The win would be a coup for Lendlease with Mace and Bouygues understood to have been in contention for the deal last year before UOL had a rethink.

Formally known as Heron Plaza (pictured), the 536,000sq ft scheme was designed by PLP and includes more the 100 apartments. Conference and banqueting facilities, meeting and events spaces, a gym, spa and swimming pool are also planned.

UOL, which declined to comment, has previously said it plans to operate the hotel under its flagship Pan Pacific hotel brand and on the Pan Pacific website the opening is scheduled for 2020.

Keltbray is currently underway with enabling works at the site after completing demolition works.

The wider project team includes WSP Parsons Brinckerhoff which is working as the structural and M&E engineer and QS Alinea, which has replaced Arcadis on the job.

Lendlease declined to comment but its win would mark another return to high-profile London building jobs with the contractor next month set to sign the deal to build Google’s £650m headquarters in King’s Cross.

And it is believed to be one of two bidders, along with Sir Robert McAlpine, left in the race to redevelop the former army barracks in St John’s Wood, north London, for Malaysian businessman Ananda Krinshnan’s Usaha Tegas Group.