Scheme was shut for more than two months

The job became the first major UK site to be hit by an outbreak of coronavirus in March and was shut down for a few days before being reopened. 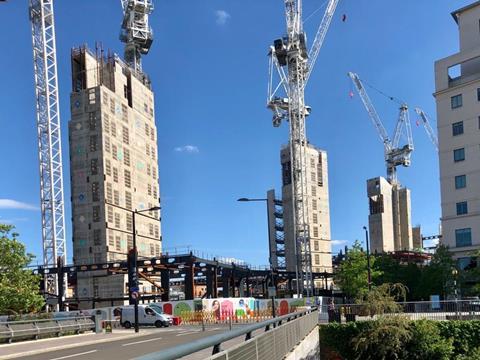 The site, pictured three weeks ago, was first shut in March

But it was shut again – along with the rest of Google’s jobs worldwide – when the crisis escalated with work stopping for more than two months.

It was the last major London site to reopen when it restarted last week with around 100 staff – half of the number before it was shut.

A Lendlease spokesperson said: “Limited works are taking place, which will follow safe working practices in line with the latest government guidance. We expect to be able to slowly increase the number of people working on site over the coming weeks.”

Other major jobs Lendlease is working on that reopened several weeks ago include One Bishopsgate Plaza and 6-8 Bishopsgate, both being built for Stanhope, in the City as well as the athletes village for the 2022 Commonwealth Games in Birmingham and the revamp of the grade I-listed Manchester Town Hall.