Scheme at Wadham to start this summer

Amanda Levete’s practice AL_A has been given planning to design a brace of new buildings at Oxford University’s Wadham College.

The buildings at the city centre site will be an undergraduate centre and an aspiration centre – so-called because it is aimed at visiting school students attending access and outreach events such as summer schools and aspiration days.

The scheme is being bankrolled by Hong Kong businessman William Doo along with college Honorary Fellow Lee Shau Kee – the majority owner of developer Henderson and Hong Kong’s second richest man with an estimated personal fortune of $24 billion. Each will have a building named after them.

The college was founded back in 1610 and comprises 200 graduate students and around 450 undergraduates.

The two buildings will replace the 1950s built Goddard Building. Work is set to start this July and complete in August 2020. Levete won the scheme back in 2016, seeing off three others, including Wilkinson Eyre, in an an invited competition. 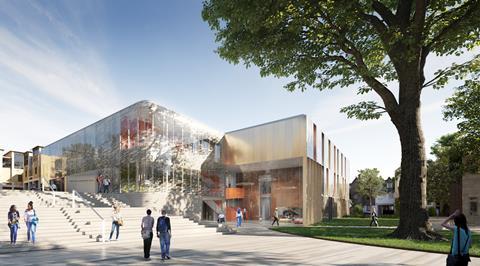 The architect won the job back in 2016