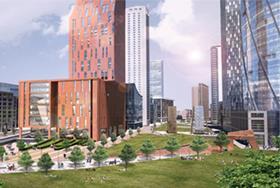 Although Liverpool council had voted to unanimously approve the 1.7 million sq metre development on Liverpool’s waterfront last year, objections raised by English Heritage about the impact of the proposed cluster of six skyscrapers on Liverpool’s world heritage status had led many to expect that the plans would be called in by the government for scrutiny.

Liverpool Waters involves regenerating a 60 hectare historic dockland site to create a mixed-use waterfront quarter which will house over 15,000 new residents. Work would include the construction of a 50-storey tower, 9,000 homes, 300,000sq m of offices, 50,000 sq m of hotel and conference facilities, shops, cafes, restaurants and more than 400,000sq m of parking.

The £5.5bn project was granted outline planning consent by Liverpool council last year and Liverpool was subsequently placed on Unesco’s list of World Heritage in Danger.

Developer Peel Holdings had said it will pull out of the project if it is referred to a public inquiry.

The application was automatically referred to the communities secretary Eric Pickles to consider whether it was in the national interest to call in the decision.

However, Pickles has now decided not the call the application in for a public inquiry, meaning the scheme can move ahead.

Mayor of Liverpool Joe Anderson, said: “This is fantastic news for Liverpool. I’m absolutely delighted that the secretary of state shares the confidence we have in our ability to deliver this vitally important regeneration scheme, while protecting our architectural heritage.

“Today’s announcement marks the start of a new era for Liverpool, paving to way to us delivering a world class development which will transform a part of the city that has been in desperate need of investment for decades.

“Liverpool Waters will create thousands of jobs and opportunities for local people, as well as providing new housing and attracting new businesses and visitors.

“It’s a huge boost for our city and yet more evidence that despite the recession, regeneration is forging ahead here.

“We can now look forward to the plans moving forward on this once-in-a-lifetime scheme which will bring huge, lasting benefits to future generations in this city.”

Lindsey Ashworth, development director of Peel said: “This is a well-deserved reward and justice for all those who never gave up supporting this scheme.

“English Heritage together with the World Heritage Body Unesco put up massive obstacles to prevent this development proposal getting permission.

“Their studies and arguments have all collapsed and rightly so as it’s simply not right to expect derelict parts of cities with such a rich history to stand still and be fossilized.

“This consent will open up opportunities and new prospects to link our UK businesses with other international businesses such as Asia.”

Paul Grover, regional director for planning for consultant WYG, which has been acting for Peel Holdings on the project, welcomed the decision.

He said: “Not only does this decision … demonstrate faith in local democracy as advocated through the Localism Act 2011, it also confirms our long-held belief that Liverpool Waters will deliver positive economic change in an in an area of high deprivation.”