Living with eco-towns: The hard sell 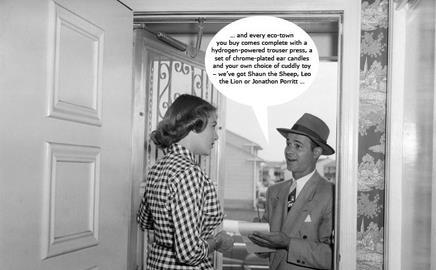 The idea of eco-towns has never been exactly popular with neighbouring communities. So now that the four sites have been chosen, how is the government going to convince the locals to buy into its low-carbon dream?

When the government finally announced the four chosen sites for its eco-towns in July, the occasion was marked more by relief in the 11 sites that didn’t make the cut than rejoicing in the places that did.

Ever since the idea of these brand new exemplars for zero-carbon living first surfaced in 2007, they have been the target of vociferous local opposition led by a cast of celebrities in green wellies, including Dame Judi Dench, John Nettles, Ben Fogle and Tim Henman’s dad.

Protesters complained that many of the 57 sites initially put forward by developers were previously rejected schemes that had been sexed up with green technology, that concreting over countryside and farmland was hardly very green, and that isolated settlements would be more, not less, reliant on cars.

In the end, housing minister John Healey chose the four sites with the least opposition, or at least strong support from the local authority. North West Bicester in Oxfordshire, Rackheath in Norfolk, Clay Country in Cornwall and Whitehill Bordon in Hampshire all have development-friendly Tory councils keen to fulfil some of their obligations for new housing with an eco-town.

But that doesn’t mean their constituents are happy, and the plans must still go through the normal planning process. Perhaps that’s the thinking behind a point in the consultation document, released in August and closing on 25 September, on how funding for the eco-towns will be divided. It asks local authorities and developers to think up “projects which would enable the existing community to better prepare for eco-town development”. This might take the form of “environmental innovation shared with the new development or enhancement of existing community facilities”, it suggests.

Depending on how cynical you are, this either looks like a sweetener to dampen opposition, or a very good idea, albeit one that was always part of the eco-towns project anyway. But what might it mean for the existing communities themselves? We went to Whitehill Bordon, which is already home to 14,000 people, to find out. Of the four sites that will split the £60m eco-town funding, Whitehill Bordon has the largest existing community. Under the new plans, up to 5,500 homes could be built on 600 acres of nearby Ministry of Defence land after an army training centre moves to South Wales in 2011.

All the eco-towns are being encouraged to reduce the carbon footprint of the existing housing and businesses just as much as, if not more than, the new ones. We have put Whitehill Bordon forward as a place where we can tackle these issues as well.

This is absolutely fundamental. It’s not just about bolting on a new community.

Some of the local housing associations already have funding to do retrofitting projects. This will not just reduce energy use, but also water use, making it easier to work from home. We will also discuss recycling opportunities, wildlife gardening and growing our own food, all of which contribute to a reduction in carbon footprint. We’ve said we want to retrofit as much of the existing town as possible up to Passivhaus standards. Now we’re looking at how we can deliver that. There are lots of different cost estimates, but it will be tens of thousands of pounds per house. We’re looking at how that could be afforded over time.

We also want to create 7,000 jobs. When the Ministry of Defence goes, Whitehill Bordon will lose 2,500 jobs, though not all of these people live in the town. What we want to do is create a new economy and attract new businesses and industries – from the green sector especially.

"A rail link is absolutely crucial"

The eco-town idea is potentially a brilliant way of solving the problem of how best to regenerate Whitehill Bordon, but if the aim of making the development carbon-neutral is to be achieved, one of the key problems to solve will be transport. At the moment, East Hampshire doesn’t do very well for commuting to work – everyone drives everywhere. If the main employer, the military, is going away, that’s going to make it worse.

They’re going to need to build a rail link – that’s going to be absolutely crucial.

They may need to start job creation before development, so the town expands to provide jobs for people. Why not set up industries to enable it to create the eco-town within its midst? We could make solar panels or green building materials and use them on site. You solve some of the carbon emissions problem and the transport issue by not having to bring in all the building materials, and you solve the employment problem at the same time. Places like Telford are famous for what was manufactured there. Maybe in a hundred years’ time, Whitehill will be the same.

The eco-towns have got to work financially for the existing community. We are not talking bribes here, but there are enhancements that can reduce their costs. If the new town is run on a communal heating system, for example, existing properties should be offered free connection to that. Everyone’s worried about rising fuel costs.

Another thing is the urban food supply. There may well be food produced within the community, on allotments, for example. They could be enhanced, expanded or reinforced so they’re not a bit of waste ground where the sheds always get broken into, but a focal point.

The community may have suffered a decline in the past 50 years – some of these places will have had a rail station in the sixties before Dr Beeching made his cuts. There may also be local facilities that have fallen into disuse that could be rejuvenated, like quarries, or lakes people used to swim in that are now just full of cars. These are more pretty-pretty things but they are still compatible with the sustainable ethos. Things the community remember being nice before, you could bring some of that back in.

As for upgrading existing buildings, there could be a big investment in insulation – we’re talking about serious levels of refurbishment and insulation here, not just cavity wall insulation and a top-up in the loft. But that will have aesthetic implications, and it’s difficult to see how that works when places already have a certain feel.