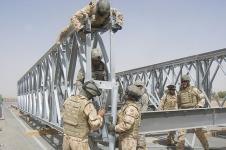 The Serious Fraud Office probe into bridge-building firm Mabey & Johnson contributed towards a £60m hit suffered by the firm over the past two years, company accounts have revealed.

According to its 2008 financial results, which were filed at Companies House last week, the company posted a loss of £11.8m as a result of more than £15m in exceptional expenses associated with fighting the Serious Fraud Office (SFO) investigation and unidentified contracts terminated as part of a separate wrangle.

The costs came on top of a £44m hit in the previous year, which included £12.8m of exceptional expenses and a £31.1m cost related to projects.

Last week, the company was fined £6.6m after pleading guilty to charges of breaching UN sanctions in Iraq and bribing officials in Jamaica and Ghana to win work.

The company declined to comment beyond a statement last month which said it had wiped the slate clean. It said: “These [£6.6m] costs will hurt the company. But our goal is to ensure we can protect jobs and take our business forward.”

The terminated contracts relate to a row that could cost the company even more money. A statement in the accounts said: “Two of the company’s long-term contracts were suspended by one customer alleging breaches of contract by the company.”

Five of Mabey & Johnson’s directors stepped down this year and an SFO-appointed monitor has come in to scrutinise its activities. In a statement, managing director Peter Lloyd said: “We have made a fresh start as a company.”