Mace and G&T under pressure over Tate Modern extension

Mace and Gardiner & Theobald under pressure on £215m job, as Stanhope takes on troubleshooting role 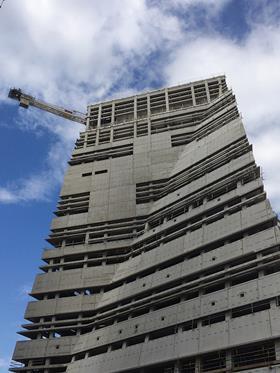 Mace and Gardiner & Theobald are coming under increasing pressure on the £215m Tate Modern extension, after it emerged that Stanhope has taken on a key role aimed at ensuring the project remains on track amid fears of further delays and budget overruns.

Mace is construction manager on the complex Herzog & De Meuron-designed extension to the Tate Modern and Gardiner & Theobald (G&T) has been acting as project manager.

The project, which was originally due to be completed in February 2012, is now not scheduled to be completed until 2016 and there have been growing fears that the scheme’s timetable could slip further.

Sources close to the project told Building that G&T has been relieved from its core role as project manager, while client adviser Stanhope has taken on a troubleshooting role, looking across the project in an advisory capacity to determine where improvements can be made.

While there is no suggestion that the role of the scheme’s construction manager Mace will change, it is also understood to be under pressure, with ministers being quizzed about problems on the project, which has £50m of government funding.

Mace, G&T and Stanhope all declined to comment this week, referring enquiries to the Tate Modern.

A spokesperson for the gallery said G&T remained on the project team, but would not say if the consultant was still the project manager - a role it was appointed to in 2008.

The spokesperson said G&T was “still very much involved […] and will continue to have an instrumental role in managing many elements of the build.

“As with all major building projects of this scale, the responsibilities of the individuals and consultants on the delivery team change as the development enters different phases,” the spokesperson said.

“This is a groundbreaking design and the professional team is responding to the challenges at each stage of construction.”

The spokesperson confirmed Stanhope has been advising “on the delivery and completion of the new building”.

The 11-storey brick clad extension will increase the Bankside gallery’s floorspace by 60%, adding more than 20,000m² of exhibition space.

The project began in 2009 and was originally planned to open in time for the 2012 Olympic Games.

But in September 2011 the Tate said phase two of the development - which comprises Herzog & de Meuron’s pyramid-like extension - would “open at the latest in 2016”.

This week the Tate Modern insisted the gallery was still on course for a 2016 opening, but did not specify an exact date, and said “further details” on the final cost of the project would be announced “in due course”.

“As you would expect with a major building project of this scale, there are regular adjustments to cost estimates,” the Tate spokesperson said.

This week Helen Goodman, Labour’s shadow culture minister, called for ministers to explain the problems on the project, which has received £50m of public funding and is considered one of the government’s major projects.

Goodman, who quizzed culture minister Ed Vaizey over the progress of the project in April, said there were real fears the timetable for the project could slip further and the budget could be overrun.

She said she would ask more questions of ministers after the parliamentary recess.

Goodman said: “The taxpayer is entitled to an explanation. Instead of pretending there is no problem Ed Vaizey should say what action he is taking to get it back on track.”