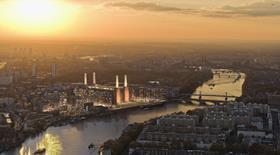 Mace has won the job to construction manage the first stage of the £700m second phase of the Battersea Power Station development.

The Battersea Power Station Development Company said that Mace had been appointed as construction manager on the £100m first stage of phase two of the Battersea Power Station development, which involves the external repair of the iconic power station itself and enabling works for the second stage of phase two, which is the main £600m mixed-use interior of the power station.

Mace will manage the trade contractors that will undertake the £100m works package, which comprises brick repairs to the elevations, the repairs to the four wash towers, and the dismantling and reconstructing of the chimneys.

As Building revealed last week, five firms were in the running for the role, with Mace beating off competition from Lend Lease, ISG, Sir Robert McAlpine and Brookfield. The appointment comes after the firms made their final pitch to the client in Malaysia last week.

Under the programme of work, all four of Battersea Power Station’s chimneys will be rebuilt in concrete, in accordance with the original architectural plans.

The preliminary works will start in October 2013. The dismantling of the first chimney is expected to begin in February 2014.

Rob Tincknell, Battersea Power Station Development Company chief executive, said: “The restoration of the Power Station is at the heart of this entire redevelopment and we are delighted that this vital work is now getting underway.

“The appointment of Mace, which has an excellent track record in historic and specialised buildings, will ensure that Gilbert Scott’s masterpiece is in safe hands and that all the contractors working on its restoration are pulling together so that we can finally refurbish it and open it up to the public.”

Alongside Mace, Buro Happold is the structural engineer: Purcell is the conservation and architectural advisor; Turner & Townsend is project manager; and Gardiner & Theobald is cost consultants.

The £600m shell and core works of Power Station, currently being designed by Wilkinson Eyre, will be tendered during 2014 with a planned start on site of March 2015.

Earlier this year Carillion beat off competition from Brookfield and Laing O’Rourke for the £400m first phase of the development.