Attraction almost double the height of the London Eye

Mace has completed work on a landmark observation wheel in Dubai, which is nearly twice as tall as the London Eye.

Ain Dubai – which means Dubai Eye – is due to take its first paying customers on 21 October. They will ride in one of 48 huge observation cabins for a 38-minute circuit in the attraction, which is more than 250m high.

Project manager and cost consultant Mace said that each of the cabins was larger than two double-decker buses placed side by side. The whole structure includes 11,200 tonnes of steel, a weight that is around one-third more than that of the iron used in the Eiffel Tower.

The world’s current tallest Ferris wheel is the High Roller in Las Vegas, which is 167m tall. The London Eye, whose construction was also overseen by Mace, is 135m tall.

At the heart of Ain Dubai is a hub and spindle assembly that weighs 1,805 tonnes, equivalent to the weight of four A380 aircraft. It is supported by four legs, each of which is 126m long.

The attraction will be able to carry more than 1,750 passengers at a time, either as ordinary ticket holders – for which the cost is currently the equivalent of £26 – or as part of more exclusive packages. 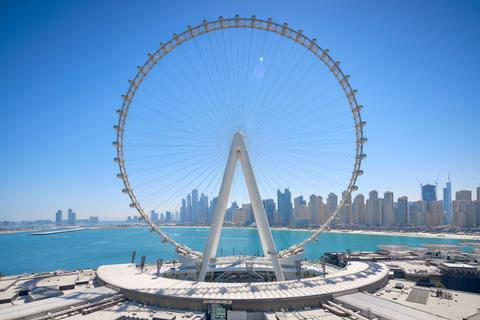 The Ain Dubai Ferris wheel, which opens to visitors on 21 October