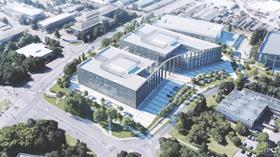 Mace’s development arm has been given the green light to begin work on a commercial scheme at Cambridge Science Park.

Designed by architect Scott Brownrigg, the job runs across 200,000 sq ft and is planned at the gateway to the park.

Mace said it has a “long leasehold” from Trinity College to carry out the work at 1-21 Cambridge Science Park.

Mace said work on building the scheme can now begin after the plans were approved by South Cambridgeshire and Cambridge city planning authorities last week. Savills has been appointed letting agent.