Broadcaster will move its music studios to the Stratford development 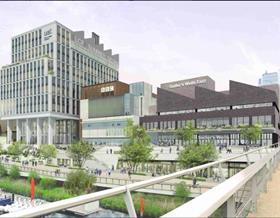 Mace is to project manage the arts and culture precinct of the Olympic Park redevelopment in Stratford which will see the BBC become the latest high-profile tenant at the scheme previously known as Olympicopolis.

Now called East Bank, Mace has been appointed by the London Legacy Development Corporation for the initiative which will see a host of high-profile cultural organisations move into the east London site.

The BBC plans to close its Maida Vale studio, where it has been since the 1930s, and move its live music base to East Bank with the broadcaster set to move into a building designed by overall masterplanner, Allies & Morrison.

The broadcaster is set to make the move following the decision by US museum group, the Smithsonian, to withdraw from taking up its own building at East Bank in favour of sharing space with the V&A.

Mace will lead project and construction management on the V&A East museum, Sadler’s Wells East theatre, a new campus for the London College of Fashion as well as the BBC building.

The hunt for contractors has begun with the first buildings at the development due to open from 2022.

Mace has been involved with the Olympic Park scheme for more than a decade having been part of the CLM consortium, which also included Laing O’Rourke, that was appointed in 2006 to manage work in the run-up to the 2012 Olympic Games.

News that the BBC is swapping north-west London for Stratford was unveiled by London mayor Sadiq Khan earlier today.

The mayor said the new development had been inspired by success of the South Bank while the BBC’s director of radio and education, former Labour culture secretary James Purnell, said: “This proposed new building will act as a magnet for music development in east London and will allow us to share our music facilities and expertise with local, diverse communities.”

Irish architect O’Donnell + Tuomey is behind designs for the V&A and Sadler’s Wells buildings, while Allies & Morrison is also carrying out design work on the London College of Fashion building. 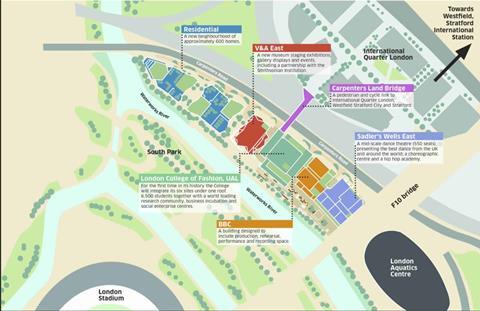