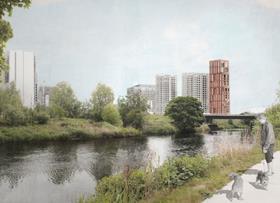 The concept design for East Bank seen from the north-east.

A specialist contractor from Kent has been handed the enabling works contract for the redevelopment of Stratford Waterfront at Queen Elizabeth Olympic Park.

The London Legacy Development Corporation (LLDC) awarded Aylesford-based utility contractor Blu-3 the £5.2m contract to deliver enabling works at the development which will see the V&A, BBC, Sadler’s Wells and London College of Fashion take up residence in east London.

The eight-month contract will see the £93m-turnover firm carry out site clearance, site hoarding and groundworks for the project, which is being managed by Mace.

Blu-3 will also be responsible for the design and construction of temporary and permanent utilities, foundations and associated works, as well as ground investigations and surveys.

The contractor, who recorded annual pre-tax profit of £5.5m last year, is also set to carry out traffic management and road closures during the work.

Last week, the LLDC put facades specialists on notice for £37m of work at the new £1.1bn East Bank cultural precinct in Stratford.

In a prior information notice published to the Official Journal, the LLDC revealed the timeline and value of the four envelope packages which are set to be handed out over the first half of next year as part of the project.