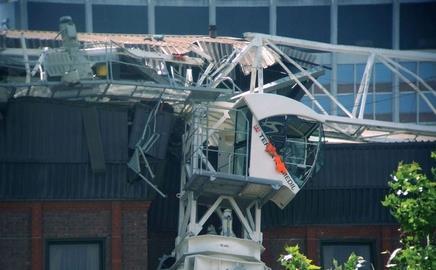 Crane safety came under scrutiny again this week as the Health and Safety Executive (HSE) revealed a long list of errors by the crane hire industry.

The disclosures came as a Laing O’Rourke tower crane collapsed in Croydon, south London, in what has been described as almost identical circumstances to the Canary Wharf incident in London Docklands in 2000, in which three people died.

Ian Simpson, an HSE inspector, listed the safety blunders that had been discovered since 2000 at the Cranes Today conference in London on Tuesday.

He said 24 serious injuries had occurred during that period in addition to the eight fatalities. More than half of the injuries were caused by objects falling from machinery.

There had also been 22 “dangerous occurrences”, including five lifting accessory failures and five jib collapses.

He said there was a widespread lack of management control, noting: “There was little guidance. When maintenance people had problems, they had nobody to go to.”

HSE officials visited 20 firms hiring out tower cranes during the period from 2000 to 2007 and made a number of disturbing discoveries during tours of sites and their inspection of paperwork at head offices.

Simpson’s speech came less than a week after the Croydon incident, in which four workers were trapped in the wreckage. The accident, which happened last weekend, involved a tower crane from Select Plant Hire, a subsidiary of Laing O’Rourke.

The crane was being extended when it buckled and fell onto the Croydon Park Hotel. Three members of the special erection team were stranded in the air and the crane driver was trapped in his cab. Simpson said the circumstances of the accident were “virtually the same” as that at Canary Wharf in 2000.

Martin Linton, the Battersea MP who this year tabled an early day motion in support of Building’s Safer Skyline campaign, said: “It’s clear from this and other incidents that not everyone is scrupulously observing the rules. It seems as if the industry has developed its own methods of working, and they only realise standards have slipped when things go wrong. I repeat my call for a publicly available register of safety checks.”

Laing O’Rourke said it would co-operate with the HSE.

Meanwhile, Douglas Genge, the director of Falcon Crane Hire, whose cranes collapsed in Battersea and Liverpool, admitted standards at his company had slipped in the months leading to the accidents.

In an interview with Building this week, Genge acknowledged that his inspection regime had not been up to scratch.

He said: “We didn’t chase our inspectors as well as we should have. The inspection reports always came in, but it could have come in this week, that week or next month.”