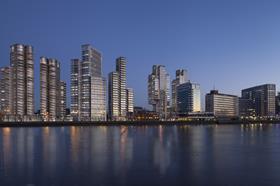 Make has won planning to replace a Texaco garage close to Vauxhall station in Lambeth with a pair of 25-storey towers.

The scheme, which has been devised on behalf of developer Ocubis, is the final scheme to line up on Lambeth embankment’s Thames redevelopment area, which lies on the opposite bank and immediately to the south of the Houses of Parliament.

As part of the development the existing Victorian warehouse will be preserved and refurbished, with a new ground-floor café and public space reconnecting the river with the historic Vauxhall Pleasure Gardens.

The scheme will include 2,162 sq m of office space as well as 166 new homes including nine for affordable rent in the refurbished Vintage House.

The scheme has been approved after the Ocubis agreed to pay Lambeth Council for the delivery of off-site affordable housing which would bring the development up to the 40% affordable threshold.