Manchester council has given the green light to a 55-storey student accommodation tower despite the scheme receiving hundreds of objections.

The 850-room proposals, designed by Glenn Howells Architects, had deadlocked a fraught meeting of the council committee with five councillors in favour and five against. 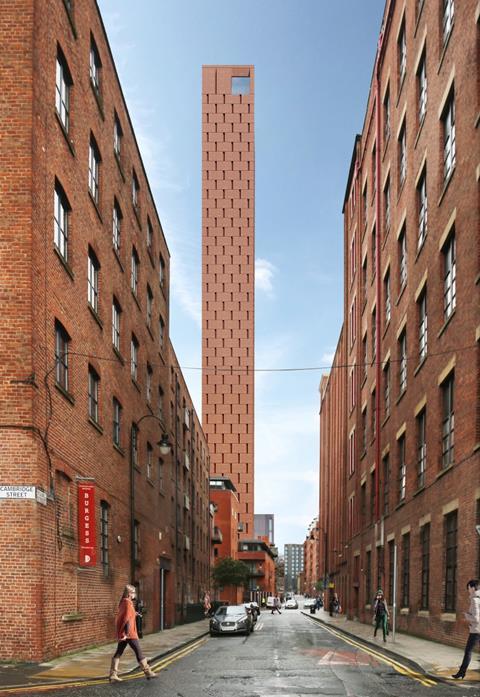 One councillor said the 55-storey tower resembled a ‘tombstone’

The £130m scheme next door to the city’s Oxford Road station scraped through after a deciding vote in favour was cast by committee chair Basil Curley, who called it an “extremely difficult” decision.

Councillor William Jeavons had earlier branded the 165m tower, which is being built for GMS Parking, a “Cheesegrater-esque tombstone” which featured “dull gable ends”.

The proposals had received three objections from the Macintosh Village Management Company (MVMC), which manages three developments in the area, supported by over 400 local residents.

More than 70 comments supporting MVMC were made on the application, with over 50 further individual objections.

MVMC said in its objections that the tower would dominate the area, removing daylight and accelerating winds in surrounding streets.

It added the building would damage the character of the historic district’s narrow streets and public spaces and said its use of fake brick cladding created a “harsh discord” with nearby grade II-listed mills and chimneys.

The scheme also includes an 11-storey and four-storey building providing work and amenity space and a rejig of a multi-storey car park on the site.

The council’s report had said the tower had also failed to demonstrate the need for another student accommodation scheme in the city, which is home to nearly 100,000 students.