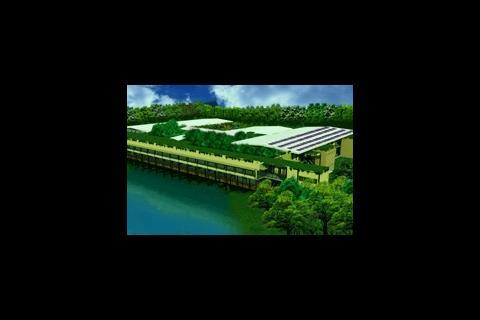 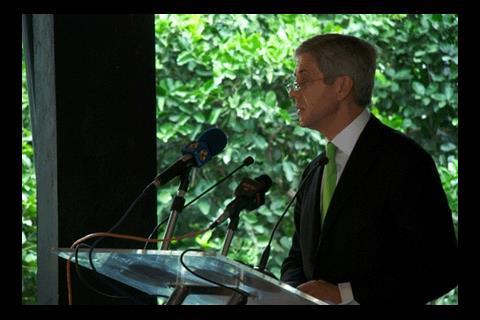 Stuart Rose at opening of M&S factory in Sri Lanka

Marks and Spencer supplier proves every building can be sustainable, including factories

It has for the last few years been a concern of many people both in the green movement and the general public that managers in far flung locations around the globe mistreat their employees in secret factories guarded by high walls and unpleasant guards.

But Marks and Spencer has been pursuing its ‘Plan A’ drive towards better conditions for factory workers, eco-practices in their production of their goods and services, and a drive towards all round green practices.

So when this factory was being built owner MAS, decided to build it sustainably and then tell the world.

MAS Intimates Thurulie, has its eco-manufacturing plant at the MAS Fabric Park, Thulhiriya, Sri Lanka. The US$7 million plant will manufacture lingerie for Marks and Spencer.

It has taken a general approach to the new factory looking at all aspects of environmental best practice, from the way the factory generates and uses electricity to the production methods of the garments themselves, minimising waste from materials and looking to microgeneration onsite to generate the electricity.

The factory boasts the largest PV array in the country, using BP Solar, 3160N panels with the production of 25.6 kWh, which is 10% of the total electricity used at the plant. The factory also utilises net metering, which means that when the factory is not in operation it can supply electricity back to the grid. The rest of the electricity is generated using a mini-hydro system sourced through a ‘green’ power agreement that MAS pioneered for Sri Lanka. The agreement is with Nilwalabase Hydro Power - which has small hydro power plants ranging from 600kw to 3MW - and the energy sector regulator Public Utilities Commission of Sri Lanka which acts as an intermediary.

MAS has also looked at the way it uses electricity. Day-lighting has been used to provide workers with a light environment to work in. It is a fact that employees are more productive in a naturally lit environment. But also they have installed energy efficient lighting and LED-based task lights, to reduce energy usage on lighting the building.

It has for the last few years been a concern of many people both in the green movement and the general public that managers in far flung locations around the globe mistreat their employees in secret factories guarded by high walls and unpleasant guards.

The other energy reduction features include an array of cooling measures, such as a sedum roof, and roofing with a high solar reflecting capability, plus green spaces around the building to reduce the heat of the micro-climate. MAS claims this will reduce energy consumption by up to 40% compared with a similar sized building. There is also an evaporative cooling system, which replaces conventional air conditioning, reducing energy consumption by up to 75%, says MAS spokesman Vidhura Ralapanawe.

Rain water harvesting also takes place here with grey water drainage into the loos, combined with low flow flushing meaning MAS can reduce its water usage by as much as 50%.

The whole building is on stilts, to help the flow of water across the surface area of the building during rain fall and to prevent mass excavation of the top soil when the building was constructed, as well as preserving the profile of the land.

The block work as well as the walkways and roads leading up to around the site, are all built using Laterite compacted soil with 10% cement. It is a modified mud-thatch house material which is not burnt in a kiln and has low embodied energy and low u values. Sewage is processed on site, using an anaerobic digestion sewage treatment facility. The gas being produced from the sewage treatment plant is then captured and used for the kitchen.

MAS has developed its own version of the Toyota Production System used to minimise waste in both the materials used and the processes to achieve better efficiency in the production process of the garments.

Overall every measure is used to reduce the footprint of this factory, taking into account the comfort and working conditions of the staff, including an onsite medical centre.

M&S chief executive Stuart Rose made a quick visit to open the store. He said ‘We’re already making progress on our 100 ‘Plan A’ goals, but we’ve a long way to go before we meet the ambitious targets we’ve set. This is a business-wide plan, which means we’re fundamentally changing the way we operate, and not just cherry picking individual initiatives. We will trial a different approach to manufacturing in our first ‘eco-factories’, just as we’re already trialling new ways of building and operating our stores, to reduce their energy emissions and their waste.”