McAleer & Rushe has won the final job on the first three buildings being developed at British Land’s Canada Water scheme in east London.

The Northern Irish contractor has previously worked with the developer on a mixed-use scheme at 10 Portman Square in Westminster while it also worked on British Land’s redevelopment of Yalding House, the former Great Portland Street home of the BBC Music department, Radio 3 and Radio 1. 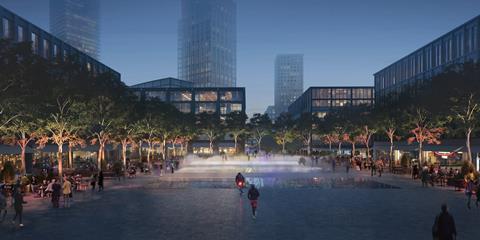 The Canada Water scheme will include a new town square

At the £3.3bn Canada Water scheme, McAleer & Rushe will build K1 – a six-storey residential block designed by Morris + Company, the former Duggan Morris which disbanded in 2017.

Earlier this week, Building revealed that Wates has signed a pre-construction services agreement for the A1 building, designed by Allies and Morrison, which will run across six and 34 storeys and will include retail and offices as well as 186 residential units.

And Mace has won the A2 building, also designed by Allies and Morrison, after overhauling long-time frontrunner Laing O’Rourke which is believed to have been unable to agree a price with the developer.

A2 will include a leisure centre, retail and workspace in a building that will reach a maximum height of six storeys. Both jobs are understood to have construction values north of £100m.

Despite the news British Land, which earlier this week said completion of Sir Robert McAlpine’s £260m scheme at 100 Liverpool Street and Lendlease’s £140m job at 1 Triton Square have been delayed around six months by the covid-19 pandemic, is understood to have delayed starting work because of uncertainty caused by coronavirus.