Scheme has been delayed by Brexit, the collapse of Carillion and covid-19

Sir Robert McAlpine is finally due to get started on a troubled £70m housing scheme in Leeds four years after it was first approved for planning.

The contractor will begin work on phase 1 of the £70m Tower Works scheme in the next few weeks after developers Richardson and Ask Real Estate secured £57m in funding from Legal & General and Access Development Partnership, a joint venture between Legal & General Capital and Dutch real estate firm PGGM. 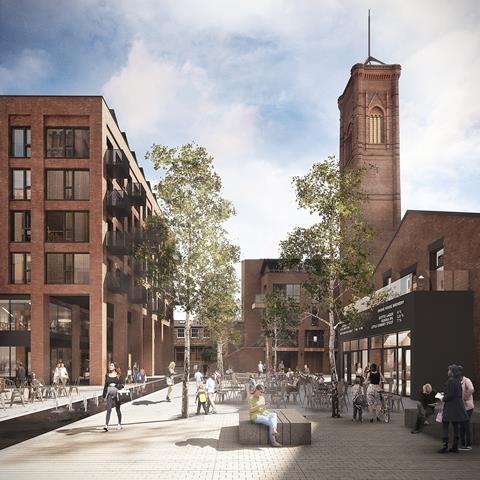 The scheme is due to start on site in the coming weeks, four years after being given the green light

The 245-home build-to-rent scheme, which was due to start on site last spring but was delayed by the covid-19 lockdown, had already been hit by design changes and the collapse of its original main contractor Carillion in 2018.

Originally designed by architect Jestico & Wiles and first approved in February 2016, the scheme was intended to provide 158 homes for private sale, 100,000sq ft of office space and 20,000sq ft of retail space.

It was rejigged by Ryder Architecture in 2017 to include build-to-rent homes instead of homes for sale and sent back in for planning, with Homes England’s predecessor, the Homes and Communities Agency, blaming market uncertainties caused by the Brexit vote in 2016.

McAlpine was appointed lead contractor in June 2019 by developer Cedar Maple Oak, a former subsidiary of Carillion now majority owned by Richardson – which Carillion used to work with on a string of schemes across the West Midlands.