Sir Robert McAlpine has been appointed as principal contractor on a restoration of the grade I-listed St Marylebone Parish Church in central London.

The project will see the 1817 church, which gave the surrounding Marylebone district its name, taken off Historic England’s Buildings at Risk register.

The church will remain open to worshippers throughout the works, during which the roof will be replaced, lost architectural features reinstated and new internal walls and floors installed. 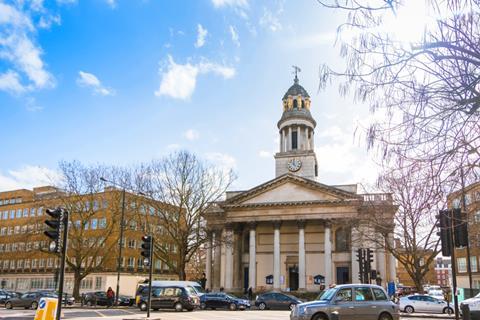 A lift will also be installed to provide better access into the building’s two-century old crypt, which will house new visitor and community spaces.

Craig Chandler, project manager for McAlpine’s Special Projects division, is leading the scheme, which is being partially funded by the National Lottery Heritage fund.

The current building is the fourth used by the parish, with the first being built in around 1200 near what is now Marble Arch.

Notable worshippers of the church in more recent centuries include Horatio Nelson and the poet Lord Byron, who was baptised in the parish’s third church in 1788.