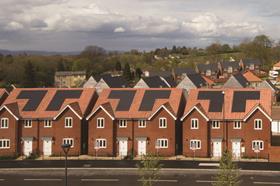 The government needs to share development risk with house builders who build homes for rental encouraging the development of a large scale private rented sector, according to a long-awaited report by developer Sir Adrian Montague.

His report said that the government should allocate redundant public sector land for build-to-let development and work with councils to identify further sites where there is demand for rented accommodation, making them available to developers.

Montague was commissioned to draw-up a report recommending ways to jump start the build-to-rent sector as part of the government’s housing strategy, published in November 2011.

His report made a series of recommendations to kick-start build-to-let developments in the UK, including, as expected using flexibility in the planning system to waive affordable housing requirements on developments for let. The report also said a task force should be established, working alongside the Homes and Communities Agency, to to overcome barriers around the unfamiliarity of build to let schemes.

Montague said: “Real momentum [in the build-to-let sector] has been inhibited by constraints affecting the supply of stock, the treatment of rented housing schemes under the planning system and the need to create confidence among investors.

“The recommendations in today’s report are designed to challenge this, and remove the barriers that prevent the kind of investment that our private rented sector needs.”

Housing minister Grant Shapps, said: ““A major part of this [review] is to attract and encourage new players to the market, while at the same time avoiding the excessive regulation that would force up rents and reduce choice for tenants.”

The report was immediately backed by developer bodies including the British Property Federation. But shadow housing minister Jack Dromey attacked the plans saying the government was failing to address the problem of a lack of affordable housing.

He said: “As rents hit a record high in July, many families are already paying the price of the Tory-led government’s failure to build enough affordable homes – the government should be acting to address this problem, not looking for ways to water down existing legislation which could make the problem worse.”

National Housing Federation chief executive David Orr said: “It is important to plan positively for housing growth which meets the needs of the whole local community. With 1.8 million households on housing waiting lists, the delivery of market rented homes shouldn’t be at the expense of affordable homes.”