But job losses continue to mount 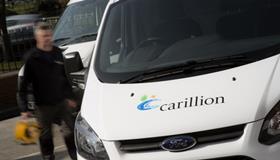 More than 10,000 Carillion workers have had their jobs saved since the contractor went bust almost three months ago.

A spokesperson for the Official Receiver confirmed 10,125 Carillion jobs have been saved in the liquidation process.

“More than 10,000 of Carillion’s pre-liquidation workforce have now found secure ongoing employment, following the transfer of 179 staff to new employers.”

But job losses have also continued to mount, with the number of jobs axed reaching 1,825.

The spokesperson said: “Regrettably 23 employees whose positions are no longer required as Carillion’s business transfers to new suppliers will leave the business later this week.

“I am continuing to talk with potential purchasers for Carillion’s remaining contracts and will keep staff, elected employee representatives and unions to keep them informed as these arrangements are confirmed.”

More than 5,000 employees are still in limbo to enable Carillion to deliver the remaining services it is providing for public and private sector customers until decisions are taken to transfer or cease the contracts.

Carillion employed more than 40,000 staff globally around half of whom worked in the UK. Its head office in Wolverhampton, which is now up for sale for £3m, had around 400 staff.