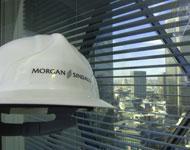 Construction group Morgan Sindall says it is on track for 2010 despite a reduction of its forward order book from £3.6bn to £3.2bn since 30 June 2009.

In terms of performance, the group announced in a trading update that fit -out is performing strongly in tough market conditions with margins remaining robust.

It added that construction was still experiencing healthy demand from the public sector and is currently advancing two major projects at preferred bidder stage, Tayside Mental Health (£100m) and Hull BSF (£200m). The group expects to achieve financial close on these projects during the first quarter of 2010.

Morgan Sindall’s infrastructure services continue to perform well and affordable housing is still seeing a reasonable pipeline of refurbishment and new build social housing opportunities, according to the statement.

The group added that the urban regeneration market remains subdued

The group's forward order book has reduced from £3.6bn to £3.2bn since 30 June 2009. However, the statement added that this was supplemented by over £900m of projects at preferred bidder stage, all of which have been awarded during the second half of this year.