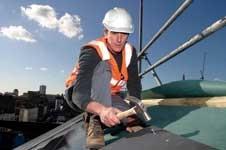 MPs back policy, pioneered by Merton council, for developments to have on-site renewable sources of energy

A bill to give councils the right of councils to implement so-called “Merton rule” on renewable energy is to be put forward by MPs today.

The bill, proposed by Conservative MP Michael Fallon, does not have government support but Fallon claims backing from senior MPs in all parties.

The aim of the bill is to enshrine in law the right of councils to set policies which insist on a minimum level of power for a development to be generated by on-site renewable energy. The policies, which have now been proposed by about 100 councils, are based on an approach piloted by Merton council in London.

Fallon told Building: “My concern is the government could override local councils by re-writing planning statements and blocking this kind of action. This is explicitly about on-site renewable power.”

The private members bill follows strong lobbying by the housebuilding and construction industry, which has argued that a variety of different local regulations will make it harder to achieve the industry’s overall zero-carbon target by 2016. This resulted in housing minister Yvette Cooper writing to Merton Council in October to stress that off-site renewable power should be allowed to count towards renewable targets.

The bill is scheduled to report to parliament in May.