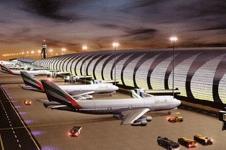 Murray & Roberts has pulled out of a $2bn (£1.34bn) contract to build Dubai Airport’s third concourse. This is the second contract in the UAE the South African contractor has seen torn up in recent weeks.

The firm was working on Concourse Three as part of the Al Habtoor Murray & Roberts Takenaka joint venture (HMRT), which delivered the Concourse 2 and Terminal 3 project, completed last year. HMRT has agreed with client Dubai Civil Aviation to withdraw from its contract to build the third concourse, according to a Murray & Roberts regulatory filing today. The contract was to have brought HMRT $548m (£366m) in revenues over the next three years.

HMRT has done a limited amount of work on the project and the filing said: “Parties will work together to reach a final account”.

The statement added: “While withdrawal from this project is not expected to have a material impact on the group’s results for the financial year to 30 June 2009, the Directors meet at end-June 2009 to consider and approve the group’s third quarter financial results and review market conditions and budget assessments for the year to 30 June 2009 and should it prove necessary, will issue a business update thereafter.”

In March Murray & Roberts had a £360m contract to build Tameer Towers in Abu Dhabi has terminated. It was working on the six tower scheme at Reem Island with two other contractors for developers Sorouh Real Estate and Tameer Holding Investment.

Murray & Roberts said at the time: “(We have) previously cautioned on volatility in the Middle East market as a result of the global financial crisis and in particular, the alliance nature of the contracting arrangement on the Tameer Towers project.”

Concourse 3 is to have 20 aircraft stands, 18 of which would accommodate Airbus's A380 Superjumbo, as well as a four-star and five-star hotel, first and business-class lounges, and duty free shops. It was scheduled to be finished by the end of April 2011.