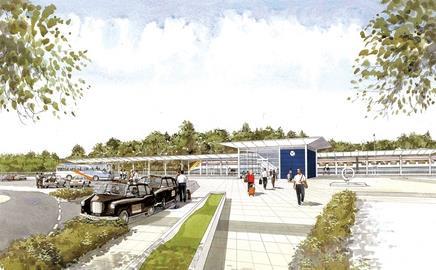 Network Rail has dropped its prototype station design six months after it was criticised by Cabe’s design review panel.

The rail operator will launch a search for an established architect to help design a station template to be rolled out to hundreds of regional rail centres across the country.

The design for Corby station (pictured), which was to be used as a model for the roll out, was produced by Network Rail’s

in-house architects. The client is to launch an open competition in the Official Journal to find a “design partner” to work up a plan for a modular station that can be used across the country.

The Cabe design review panel said of the Corby design in September: “We are disappointed that Network Rail has decided to promote a station model of such low quality. We think this could be a lesson in how a relatively modest building could benefit from committed design thinking despite a limited budget.

“However, the lack of quality and imagination presented in the architectural approach is of particular concern to us.”

It did not recommend the scheme for planning, and advised against rolling it out as a prototype design. However, Network Rail remains adamant that Corby itself will go ahead and this week Kettering-based Mainland Contractors was appointed by North Northants Development Company and English Partnerships to undertake enabling works around the site of the station.

Diane Haigh, director of architecture and design review at Cabe, said: “We welcome Network Rail’s decision to redesign the template and look forward to reviewing it. As this will be rolled out across the UK it is vital that it is of the highest standard.”

For more on Cabe search www.building.co.uk/archive