A public consultation on the next phase of the £700m Paradise development in Birmingham has been started by new developer MEPC ahead of plans being submitted to the city council later this summer.

MEPC took over the scheme from Argent at the beginning of the month with Argent saying it wanted to focus on its schemes in London at King’s Cross, Brent Cross and Tottenham Hale. MEPC is the development arm of Hermes which has been a long-standing funder of the Paradise scheme.

The next phase of the scheme involves building a new 17-storey hotel designed by ISA Architecture & Design and Paradise masterplanner Glenn Howells Architects.

The hotel on the south-western corner of the development will feature 152 bedrooms, a ground floor food space, plus a sky bar with views across the city.

This next phase will also include an office building, Three Chamberlain Square, fronting Paradise Street and which has been designed by Feilden Clegg Bradley Studios.

The practice won an invited competition for the block last year beating Birmingham’s Associated Architects, Shedkm and Reiach and Hall.

Bam built the first two office blocks, known as One and Two Chamberlain Square, at the city centre site. Number One was designed by Eric Parry with the Two drawn up by Glenn Howells. Sir Robert McAlpine is also working on another Howells scheme at the development, One Centenary Way.

New public realm for the next phase is being designed by Grant Associates landscape architects who designed the public realm in the first phase.

The consultation runs until the end of the month with an online drop-in session talking place next Tuesday evening.

In the spring, the council gave planning for 155m tall residential tower called Octagon, also designed by Glenn Howells. A contractor for the 49-storey scheme is due to be appointed shortly. 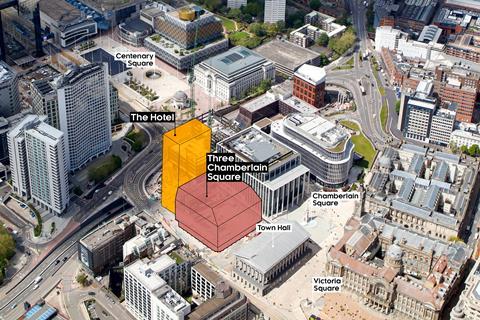