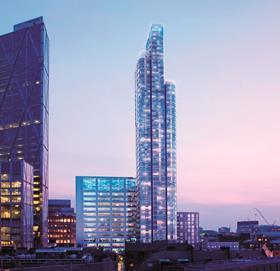 Concord Pacific Group has bought a 50% stake in the 50-storey residential tower element of the scheme from Brookfield Office Properties (BOP), which Building understands could now commence before the remaining office portion of the scheme.

Concord has not bought a stake in the office element of the scheme, a 16-storey adjacent block, which remains 100% owned by BOP.

The office block is seeking a substantial pre-let before a construction timetable is set.

Brookfield Multiplex has been known to be the contractor since June last year, when parent company BOP bought Hammerson’s office portfolio, including Principal Place.

Hammerson had previously shortlisted Sir Robert McAlpine and Skanska for the job before the sale of the development.