But staff numbers fall as furloughed employees are let go

Construction activity’s rate of growth increased in September, with new orders reaching their highest level since before the government-imposed lockdown in March.

In August respondents to the Markit/CIPS survey said a lack of new work to replace completed contracts had acted as a brake on the speed of expansion but in September this bounced back to pre-March levels.

The headline seasonally adjusted index for total construction activity registered 56.8, up from 54.6 in August. Any figure above 50.0 indicates growth. 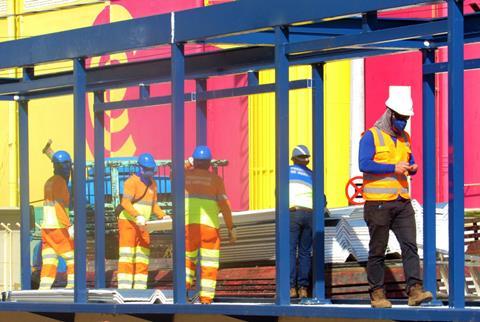 Activity was up in September compared to the previous month

Anecdotal evidence suggested the expansion in overall activity was driven by an improvement in demand conditions during September, with new orders rising for the fourth time in as many months. Respondents attributed this to a release of pent-up demand.

While this was a positive sign for the industry Mark Robinson, chief executive at Scape Group, said there were still concerns about future pipelines of work coming to market quickly enough.

He said: “The prevailing uncertainty around future lockdowns is likely to hinder private capital investment in the months ahead, and the onus is on the public sector to pick up the torch of industry and bring the construction sector along with it.

“As such, it is crucial that projects move through procurement swiftly so that we can seize the opportunity to invest in the future of communities and public services through high-quality, low-carbon facilities.”

> Mark Robinson speaks to the Building Boardroom: Enabling public sector clients to get the job done

Meanwhile, staff numbers continued to fall in September, though the rate of workforce contraction eased to the slowest for seven months.

Kate Kirby, partner in the construction and infrastructure practice at legal business DWF said staffing levels could change in the near future, given that the furlough scheme is being wound up at the end of the month.

She added: “Today’s figures show a sharp increase in UK construction activity at the end of the third quarter, due to pent-up demand in new business. On the employment front, staff numbers continued to fall in September as a result of businesses releasing furloughed workers.

“Looking ahead, the sector really needs to prepare for a few difficulties as the furlough comes to an end and the job support scheme kicks in, and whether employers opt for the latter, more complicated, option.”

UK construction firms also recorded a marked increase in purchasing activity at the end of third quarter, with the rate of growth accelerating at the fastest pace since October 2015.

Duncan Brock, group director at the Chartered Institute of Procurement & Supply, said this increase in purchasing of materials could, in part, be attributed to the uncertainty of future supply.

He said: “Builders are stocking up for Brexit and covid preparations, so purchasing remains strong in spite of longer delivery times and some shortages.”

The next PMI update will be released on 5 November.