Construction’s recovery from the depths of the covid-19 crisis eased in August, with growth slowing down from the near five-year high seen during July.

Respondents to the latest IHS Markit/CIPS survey said a lack of new work to replace completed contracts had acted as a brake on the speed of expansion. 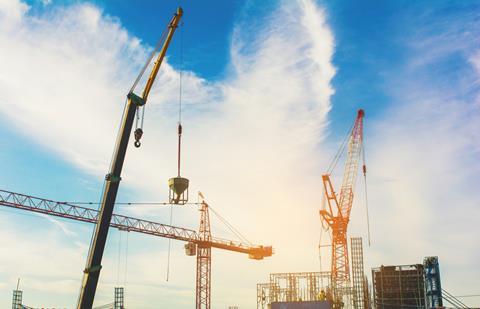 While higher levels of activity have been recorded in each of the past three months, the latest expansion was the weakest over this period.

All three broad categories of construction provided a weaker contribution to the headline index in comparison to those seen in July.

Tim Moore, economics director at IHS Markit, said: “Another month of widespread job shedding highlighted the ongoing difficulties faced by UK construction companies, with order books often depleted due to a slump in demand from sectors of the economy that have experienced the greatest impact from the pandemic.”

Housebuilding has registered the strongest rebound since the stoppages of work on site in late-March due to the coronavirus pandemic, a trend that continued in August, with the seasonally adjusted housing activity index sitting at 60.7.

The equivalent figures for commercial work, 52.5, and civil engineering activity, 46.6, were notably weaker than the headline index in August, with the latter actually contracting.

Total new business volumes increased for the third month running during August, but the rate of expansion remained only modest and slowed since July.

Construction companies said economic uncertainty and a wait-and-see approach among clients had limited their opportunities to secure new work.

He said: "With private capital likely to be less forthcoming in the coming months, the public sector must continue to be the driving force behind the sector’s output."

Robinson said for this to be achieved the next round of planned ‘build, build, build’ projects needed to be revealed and progressed quickly.

Jan Crosby, UK head of infrastructure, building and construction at KPMG, said while August’s data may have pointed to an easing of output growth, it was important to recognise that at least the positive momentum continued and there remained a sense of optimism.