A new plan to develop land around HS2’s Old Oak Common station has been lodged with the planning inspector.

The Old Oak and Park Royal Development Corporation (OPDC) has submitted a revised draft local plan to support building more than 25,000 new homes in the area. 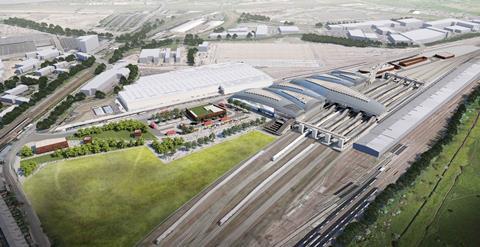 How the proposed Old Oak Common station will look when built

The development will be focused around the WSP and Wilkinson Eyre-designed station, which is set to become a major transport hub with HS2, Great Western and Crossrail services all due to converge at the site.

David Lunts, chief executive of OPDC, said: “By focusing on public sector-owned sites we can coordinate major regeneration at scale.

“We will be consulting the community in the months ahead and, subject to the planning inspector’s approval, hope to see the local plan adopted before the year is out.”

Much of this land is owned by the public sector, mainly HS2, Network Rail and the Department of Transport.

Lunts said the OPDC has been working with local landowners to prepare the plans as well as the three London planning authorities covered by the area, Ealing, Hammersmith & Fulham and Brent.

Alongside the local plan, OPDC will shortly be submitting a bid to government for infrastructure funding support to help build new access roads, bridges and utilities ahead of main housing work beginning.

Old Oak Common station is being built by a team featuring Balfour Beatty, Vinci and Systra.