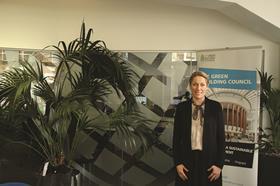 The incoming chief executive of the UK Green Building Council, Julie Hirigoyen, has set out the top three priorities the organisation wants
the next government to adopt to create a more sustainable built environment.

Speaking to Building, Hirigoyen - who has departed consultant JLL, where she was UK head of sustainability, to take up the UK Green Building Council (UKGBC) role from Tuesday (7 April) - said she thought sustainability would be “a big issue” in the general election campaign.

The Liberal Democrats have already committed to making energy efficiency a national infrastructure priority, a pledge made by energy secretary Ed Davey at the Ecobuild conference last month, but the other parties are yet to follow suit. The policy is also a key part of Building’s Agenda 15 manifesto.

Minimum energy efficiency standards were passed into law by parliament before the pre-election “purdah period”, which Hirigoyen welcomed, and will make it illegal for landlords to rent out the most energy inefficient homes and properties from 2018.

Hirigoyen argued a commitment to both zero-carbon homes and non-domestic buildings was “doable”, adding: “If there’s consistency and the requirements are clear the market will respond and deliver.”

Hirigoyen said she was “excited” to be heading up UKGBC, which she described as a “very effective group that punches well above its weight”.

She said her initial aims were to meet UKGBC members to discuss “what they most value” and “review our value proposition”, as well as “bringing in new members where we can to improve our scale and impact”.

The UKGBC currently has 400 members ranging from academics to major corporate firms.

Hirigoyen said she hoped, with UKGBC’s input, construction and property firms could meet the “next level of maturity” in sustainability over the next five years, “making it mainstream rather than just a feature of showcase projects”.

She said she would advocate “a more holistic approach” to sustainability and expected more firms to judge “the whole socio-economic impact of their projects and portfolios as well as environmental”.

The increased emphasis on supply chain relationships as demand for services begins to outstrip supply will boost sustainability, Hirigoyen argued. She said: “The focus on supply chains will become more and more important. Resource scarcity will force businesses to look more carefully at things, and at what materials they use and where they come from.”

Hirigoyen said her background as founder of sustainability consultant Upstream - which was later acquired by JLL, leading her to work her way up to UK executive level of that firm - would stand her in good stead at UKGBC.

She said: “I’m excited to bring a real commercial grounding and entrepreneurial background to the role.”