Construction on £100m scheme set to start next year

Construction work on the UK’s tallest observation wheel is set to begin early next year after the scheme on Newcastle quayside was given planning by the city council.

At 140m, the wheel will be 5m taller than the London Eye on the capital’s South Bank.

As well as the wheel, called The Whey Aye, Hong Kong-based developer The World Wheel Company said the scheme will include a 12m-high steel structure called The Geordie Giant and a multi-purpose play and sports complex.

The wheel will be built on the site of the now-demolished Spillers Flour Mill.

World Wheel Company has set up a base in the city to manage the £100m development which will open in 2023.

Designed by Marks Barfield, construction manager on the London Eye, which was known as the Millennium Wheel when it was erected in 1999, was Mace while the steelwork contractor was Dutch firm Hollandia. Civil engineering work was carried out by Tilbury Douglas, which later changed its name to Interserve. 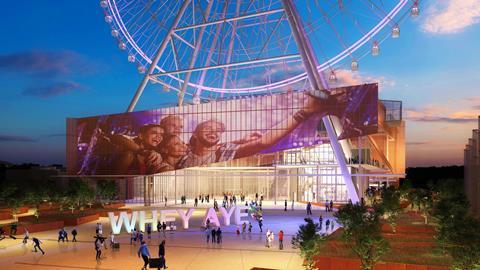 The scheme is expected to open in 2023