Nice stadium, shame about the football 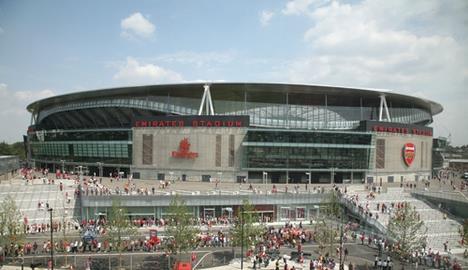 It's hard to feel passionate about the corporate world of Premier League football, but Arsenal's Emirates Stadium goes some way to restoring faith in the beautiful game

The first flat I rented in London was in Tuffnell Park. Even though Nick Hornby hadn’t been invented, I made a determined effort to go to three consecutive Arsenal home games. So I could immerse myself in the local culture.

The first game was a goalless draw. Undeterred I arrived for the second match half a minute after kick-off, during which time Arsenal had scored the only goal. And the next hour and a half was dedicated to maintaining that status quo. In the third I missed a goal from each side as I queued up with about 7000 other young men at half time, in the Augean stable that was the gents on the east Terrace.

I still get flashes of overwhelming astringency caused by thousands of gallons of fresh steaming uric acid. Talk about a slum sport, played in slum conditions for a slum audience.

Last week a client rang up to ask if I wanted to see Arsenal play Birmingham that afternoon. I’ll watch a world or European cup (if we’re still in it) and be gripped, but Premier League football has become so corporate that there doesn’t seem to be much difference between supporting Spurs or supporting Sainsbury’s, but again I was curious to see the Emirates Stadium.

This has famously been delivered on time and on budget and although it is not the Mound Stand at Lords in terms of architectural quality, it works well. Practical, good visibility, bars and toilets not as good as the O2 arena but pretty reasonable with a dramatic view over north London while you are waiting, and a sweeping dramatic arena when you are watching.

It is a great contributor to sport in Highbury. Every team should have one.

Look out for Gus Alexander's final venue review when he indulges in some high culture at the Round House theatre.