‘No approval’ for collapsed building 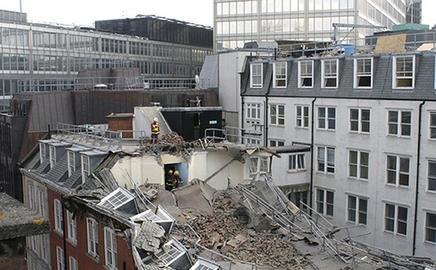 The cause of a building collapse in Victoria, central London, remained uncertain as Building went to press.

However, it is understood that renovation work at the site did not have building control approval, writes Dan Stewart.

The top two floors of the Queen Anne Business Centre collapsed at 4pm on Monday, spilling debris on to Dean Farrar Street. A builder reported to be carrying out the renovation work was trapped in the wreckage until early the following morning.

Demolition contractor Keltbray was brought in to clear up on Tuesday.

A Westminster council spokesperson said: “To the best of our knowledge, no building control approval was applied for for work in that building.”

Splendid Hotel Group, owner of the building, had applied to convert the centre into a hotel in October last year but the application was rejected as the paperwork was incomplete.

To the best of our knowledge, there was no building control approval

The building was being let to short-term tenants including Hazel Blears, a Labour party deputy leadership candidate, when it collapsed. Six of Blears’ volunteers were in the building but all were safely evacuated.

Splendid Hotel Group had employed Algip Construction of Haringey, north London, to carry out the work. Splendid and Algip were unavailable for comment.

If the contractor was performing structural work it would have required building control approval from Westminster council. If it was renovation that did not involve structural work, then approval would not have been required.

Dean Farrar Street is expected to be closed to the public for a week.

For updates on this story, check www.building.co.uk/breakingnews