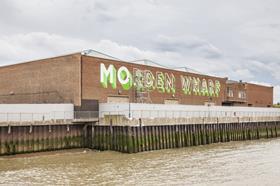 Rem Koolhaas’ architecture practice OMA has won the role of masterplanner and lead architect on Morden Wharf, a 19-acre scheme in Greenwich Peninsula in East London.

The scheme by developer Cathedral Group and Development Securities has the potential to produce a £950m, 2 million sq ft mixed-use scheme.

OMA, the renowned practice behind the CCTV building in Beijing, has designed a handful of projects in the UK, including Rothschild Bank’s headquarters in London and a Maggie Centre cancer care centre in Glasgow, which were both nominated for the 2012 Stirling Prize.

The Modern Wharf scheme, sometimes known as Greenwich Beach, sits on the Thames near the O2 Arena.

The Peninsula is attracting billions of pounds of investment, with Quintain and Hong Kong investor Knight Dragon developing 10,000 homes and the £65m O2 hotel by O2 Arena-owner AEG starting on site with contractor Balfour Beatty this month.

“We needed a world-class architect and we found one in OMA. We were impressed by their significant experience of masterplanning major regeneration sites, and their specific experience of waterfront development.

“We share a passion for creating great, inspiring places with real heart and soul, investing in the very best design to foster inspiring local communities.”

OMA partner Reinier de Graaf said: “As the masterplanner and lead architect for Morden Wharf, we are excited to have the opportunity to work with an ambitious development team on one of the last significant riverfront sites on the Thames.

“Our vision for Morden Wharf adds value to an already impressive site through regeneration of existing buildings and infrastructure which will attract visitors and residents to the sites cultural, residential, leisure, and commercial offerings.

“We look forward to the development of an innovative proposal which will enhance Morden Wharf’s exceptional character.”