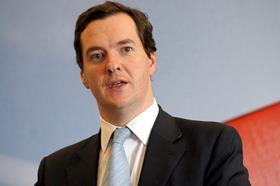 Chris Huhne, a Liberal Democrat and former energy secretary, told the BBC’s Radio 4 Today programme this morning that it depressed him the government was missing some “very easy hits” to incentivise take up of energy efficiency.

However, the chancellor, responding later in the same programme, said that the government already had a programme funded by the Treasury that did help insulate the homes of those who are the poorest or in fuel poverty.

He said: “It’s not just the Green Deal. We also have something called the Energy Companies Obligation (ECO), which is a scheme that energy companies use to go into some of the poorest homes or the homes with the highest energy bills relative to their income and the size of their home to make sure they’ve got all the energy efficiency that they can possibly have.

Huhne had earlier said: “On energy saving we could be saving a lot of energy and reducing our bills if there were greater incentives for the Green Deal.

“Our homes are incredibly inefficient. They leak energy, and that costs an incredibly amount. It has been the Treasury that has really been the obstacle to that.”

The Liberal Democrats adopted a series of proposals to strengthen the Green Deal as official party policy at their party conference earlier this month.

The proposals included commitments to introduce incentives for people to take-up the Green Deal by bringing in variable rates of stamp duty and council tax based on the energy efficiency of a property.

The paper also proposed that the party should back the introduction so-called consequential improvement proposals, which would require householders to upgrade the performance of their homes when building extensions.

The news comes as the Federation of Master Builders (FMB) warned that the Green Deal would fail unless the government takes swift and decisive action to incentivise consumer demand for energy efficiency.

The FMB said a recent survey of their members found that more than 70% thought that a reduced rate of VAT would be a “successful” or “highly successful” way of encouraging their customers to commission energy efficiency work.

Almost two thirds of FMB members surveyed (65%) thought a free energy-efficiency assessment would encourage more of their customers to improve the energy efficiency of their home.

Brian Berry, FMB chief executive, said: “It’s time for the government to accept the Green Deal has not been a success.

“The FMB has worked hard to promote the Green Deal to small construction firms, but until our members see a clear demand for Green Deal work and a more straightforward route to the Green Deal market, they will not engage with the scheme.”

“A reduction in VAT would reduce the overall cost of the work and make Green Deal finance more attractive to home owners who may be deterred by a large debt against their property.”

“Our latest research also supports the government’s own findings that just having a Green Deal assessment is enough to encourage a significant number of people install energy efficiency measures in their home, regardless of how they choose to pay for it.

“Government research found that from a sample of households that had a Green Deal assessment, 81% have already, are in the process of or intend to install at least one energy efficiency home improvement.

“That’s why the government should consider offering free energy efficiency assessments alongside a reduction in VAT.”

Berry concluded: “Above all the government needs to seize the opportunity to announce how it intends to light the touch paper to the flailing Green Deal scheme.”