Pre-tax profit at contractor Osborne hit its highest level for four years in 2011 despite the  recession, after the family-owned firm picked up a number of contracts from collapsed social housing contractor Connaught.

Osborne picked up contracts from Town and Country Housing Group and Merton Priory Homes, which will add £5m a year to turnover, following the collapse of Connaught in September.

The firm has won large projects, including a £24m O’Donnell + Tuomey-designed student centre at the London School of Economics, in the last year.

Chief executive David Fison said he was pleased with the results, given the economic environment, and did not feel any need to increase the scale of the business to compete with the likes of Balfour Beatty and Carillion. “If we focus on our customers, then profit and growth will follow,” he said.

“In any recession you’re mad if you think life’s good, but life feels okay at the moment. We have restructured quite heavily without losing a huge amount of staff, allowing us to be more customer focused on individual sectors at the front end, but share more resources behind that.”

He said restructuring was likely to continue this year, but that staff numbers were unlikely to fall any further. “We’ve had to cut but we’ve been able to hang on to our capabilities,” he said.

Fison also said the firm had started acting as a developer to diversify its revenue base. 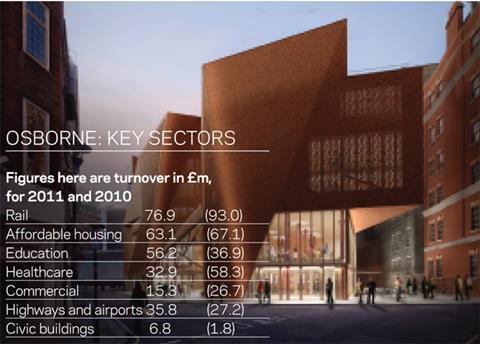