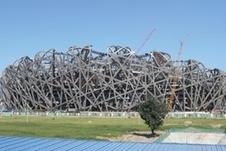 China is planning to divert billions of gallons of water hundreds of miles from drought-stricken regions to feed Olympic development in the capital Bejing, reported the Telegraph on Saturday. The paper said workers are struggling to finish the first phase of a huge canal to meet a surge in the demand for water, fuelled by construction projects and athletes and visitors at the games in August.

Counties that caught up with property boom

Airport group BAA’s sale of its jointly owned £1bn property portfolio has been grounded after failing to secure a buyer, reported the Sunday Telegraph. BAA owner Ferrovial had hoped to sell the portfolio, which is owns 50:50 with Morley Fund Management, to pay down part of the £7bn debt on the airport operator’s balance sheet.

Number’s up for Rank’s bingo hall

Gambling group Rank has sold its Mecca bingo club on London’s Kilburn High Road to a gospel church in a £9m deal, said The Sunday Telegraph. Ruach Ministries is converting the Grade II listed building into a Christian centre.

Tesco is moving on to the estate agent’s patch

The Sunday Independent reports on Tesco’s plans to launch its own online property-selling service. The aim was to compete with websites such as rightmove.co.uk and primelocation.com by undercutting commission rates.

According to the Sunday Independent, Sellafield nuclear station has been shut after vital equipment broke down. At the same time a damning report was published, which said the station’s safety procedures for preventing accidents were a shambles.

What price Eden when builders offer the earth?