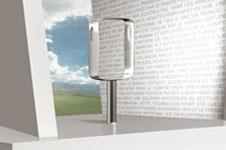 Celebrity French designer Philippe Starck is to launch a designer wind turbine for homes next year.

Described by the designer as a 'sexy object', the Democratic Ecology turbine features a square blade rotating around a vertical axis.

However, Jo Bradley of the Carbon Trust told the Sunday Times that the carbon saved by the turbine may be less than the carbon emissions produced during its production.

Starck, who has described most of his previous work – which ranges from designer lemon squeezers to luxury hotels – as “unnecessary”, is planning a range of eco products.

These include solar panel windows and glass walls which change from clear to opaque at the push of a button.