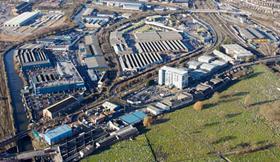 Communities secretary Eric Pickles has approved the setting up of a new development corporation tasked with building 24,000 new homes and creating 55,000 jobs in the Old Oak Common and Park Royal area of west London.

The proposal for overseeing the redevelopment of the 950 hectare site surrounding the huge HS2 and Crossrail interchange earmarked for Old Oak Common will now need to be approved by Parliament. The expectation is that it will come into effect on April 1.

The corporation would take over planning responsibilities from the local authorities currently responsible for the area in a bid to better co-ordinate development.

In November auto-retailer Car Giant, which owns 47 hectares of land in the development corporation zone, entered into a collaboration with developer London & Regional Properties to redevelop its holding.

The move plunged football Club Queens Park Rangers’ earlier plans for a new stadium on the site and a wider regeneration scheme into jeopardy.

But the deputy mayor of London Sir Edward Lister told the Financial Times yesterday he was supportive of the idea of a stadium at Old Oak Common and was in discussions with both QPR and Cargiant about accomodating the respective teams’ plans on the site.

Tony Mendes, managing director of Cargiant said: “Cargiant welcome the decision by the Secretary of State to approve the establishment of the MDC at Old Oak and Park Royal. This shows the momentum behind the project and we look forward to working with the MDC as we continue to develop our early plans for this important site.”

“The Cargiant site is the largest privately owned in the proposed MDC area and we see our long term regeneration plans as central to unlocking the Mayor’s vision for Old Oak Common.”