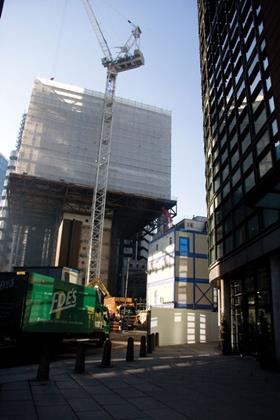 The owners of £1bn Pinnacle tower have secured an extension to a £140m bank loan in a move that buys the project more time, with the backers of the stalled scheme now reviewing the project in a bid to boost its viability.

Confirmation of the extension, which was agreed before Christmas, comes as the owners of the £1bn scheme on Bishopsgate settled a legal row with contractor Brookfield Multiplex over £16m in unpaid fees.

In a statement, Pinnacle No 1 Ltd, one of three special purpose vehicles that own the scheme, said it had secured a two-to-three-year extension to its £140m loan with HSH Nordbank, which had initially been taken out to secure the site and had first matured in November 2010.

The loan had twice been extended, although according to Building’s sister title Property Week, HSH had reserved its rights, which means the loan essentially had to be repaid on demand. With the dormant for over a year due ti funding issues and little progress on new debt, equity or a prelet, HSH had been sounding out the possibility of putting the site into receivership. But now the bank has agreed to extend the loan once again.

The owners of the project said: “The Pinnacle No 1 Limited announces that it has secured finance to continue the Pinnacle project over the next two to three years with an extension of the HSH Nordbank loan.

The parties declined to comment further on the detail of the settlement, but it is understood that the review, expected to take around three months, is aimed at reducing the construction cost, which under current plans could be as high as £1bn.

It is not yet certain whether this could also entail a comprehensive redesign of the Kohn Pederson Fox-designed tower.

As first revealed in Building, the owners of the Pinnacle had been ordered by the High Court to pay Brookfield Multiplex £16m, after it failed to file a defence against the contractor’s legal claim.

Brookfield launched the legal claim in a bid to recover four separate interim payments for work undertaken under its £593m building contract for the 63-storey tower.

The court order gave Brookfield Multiplex the option to bring a winding-up order against the three special-purpose vehicles that own the development on Bishopsgate.

The agreement between the parties removes the imminent threat of insolvency from the project.

However, it is still no clearer when the project will restart, as it is understood that a pre-let is still required for the scheme to go forward.

The project is being developed by Arab Investments, the property company set up by Kahlid Affara.